What Limekiln State Park lacks in size, it makes up in features—a lovely redwood grove with a 100-foot waterfall, a creek running through it to the sea and a beach cove. From nearly every spot you can hear water tumbling over granite rocks and boulders. Carpets of red sorrel, elk clover and ferns fill the forest while relatively young redwoods pepper the hillsides; bright orange columbines are still blooming in late September.

During our two-hour hike through the forest on the Limekiln trail, Falls trail and Hare Creek trail, we spotted some of the 200 species of birds that occupy this region. A great blue heron fished near the mouth of the creek. Perhaps it was the same one that landed on the trees in our campsite later. A pair of bright yellow warblers sang and darted among bushes and trees. I finally caught a few shots of one when it fed on the fennel plant. While fennel is invasive, there’s none more aggressive than the Pampas grass, which is now covering the hillsides of the central coast.

The mammals we met were feisty little squirrels dashing in and out of campsites as soon as anyone put food on their tables. The squirrels steal even when you’re just moving things a few feet between your car and your picnic table. We wised up after losing a few bananas and an unopened bag of potato chips. The Stellar’s jays are also thieves, but these two rather different types of animals don’t seem to bother each other at all. I guess they figure there are enough unschooled campers around from whom they can pilfer plenty of goodies. 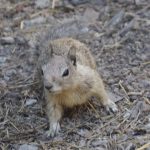 Sadly, you won’t find old growth groves at Limekiln, the southernmost redwood grove in California. More than 130 years ago, Rockland Lime and Lumber Company came in and extracted the lime and processed it in four large ovens. To do that, they clear-cut the forest for fuel and lumber. In three years all the redwoods were gone. The history explains how Limekiln State Park got its name.

After the hike, we walked right down to the beach to see the sunset. We found ourselves in a foggy mist watching the lavendar silhouettes of large rocks, usually covered with birds in the daytime. The tide rolled in and splashed over the boulders around us. The scene grew more mysterious as it got darker and darker until we had to almost grope our way back to our campsite. The next morning I saw raccoon tracks between the freshwater Limekiln Creek and the shoreline we were on.

The park is located two miles south of Lucia, a one-restaurant town on Highway 1 opposite the Santa Lucia Range on the east side of the road. It’s easy to miss as you come around the curve because you’re likely focused on the outstanding views of the Pacific Ocean to the west. Limekiln supports 29 campsites, a few short trails and picnic areas. The small campground of this 700-acre park is always packed and sites are crowded together with little privacy. But somehow the redwoods arching over the sites and the sounds of the creek seem to make it all worth it for campers.