Ever felt small – I mean in a good way? That’s how I felt when I stood next to a 250-foot tall sequoia tree in Sequoia National Park and reflected on the fact that humans don’t really have dominion over nature as many would like to believe. The sheer massiveness of the tree’s stature humbled me the moment I gazed up. Wearing auburn bark on their long bodies and frilly top-hats of green leaves, the sequoias reminded me of a regal beauty queen reigning over her court. Because they reign over everything—every other tree, every other species, every other living thing.

It’s remarkable that a tree weighing seven tons could survive with such shallow roots. But many other characteristics support the sequoia’s growth and longevity, such as its thick fibrous bark. This enables the tree to be almost completely fireproof. So the sequoias can live 2,200 years or longer. A few trees have been aged at about 3,200 years old. Almost the only cause of a sequoia’s demise is when it falls over.

I had the opportunity to see these behemoths by taking a weekend field class with Ron Felzer, a naturalist with a depth and breadth of knowledge about ecology that every student should emulate. Arriving early, I circled Indian Meadow on foot right across from the Princess campground where I was staying. Surprisingly, this late in the season, the meadow opened up with light pink blankets of wildflowers, and a few other plants still blooming like dark pink clarkia and bright yellow goldenrod. Sequoias grow here with ponderosa pines, white firs and incense-cedars.

As I bent down to pick up a pine cone, a tiny frog jumped away. It was one of the Pacific chorus frogs that live in the Sierra Nevada. Their colors are quite variable and this one, hiding in the pine needle duff, had large black and green patches on its brown skin. I noticed that when the frog had its legs folded up under its body the three black patches of the back, the upper leg and the lower leg aligned. That has to be a part of its necessary camouflage against predators given that it is only ½-inch small.

I wondered how it could survive in what seemed like dry needles and leaves. Camp staff explained that there is enough moisture around the meadow to support amphibians and nourish the trees. In fact, it’s so moist in the middle of the meadow that no trees can grow there because it is too wet.

I was fortunate to see this area as dusk fell and enjoyed the golden sunset falling across the golden meadow. 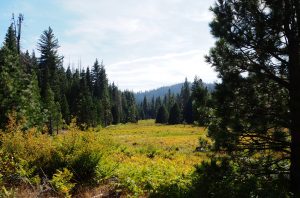 Stay tuned for Part II (my next blog) with more on the Sequoias.