One of the known problems of today’s environment is the breaking up of contiguous landscapes that contain habitats of a wide variety of organisms. In San Mateo County, however, we can find a complex of four contiguous parks, each with one or more redwood groves, totaling 8,020 acres. Together the parks form part of the northern range of the Santa Cruz mountains.

Sam McDonald County Park offers an old growth grove, views of the Pacific Ocean and grassy meadows. On a recent workday I found myself enjoying its rich habitat alone. I only saw two other visitors that day. I took the Heritage trail out of the parking lot and soon encountered the Big Trees trail where mature redwoods appear out of the sky like giants on their morning walk. Cradled by ferns, nightshade and sorrel, these titans create a sense of calm and well-being wherever they stand. The tallest tree in the grove is 280 feet.

Sam McDonald, after whom the park was later named, “was born in Louisiana in 1884, the fifth of seven children and son of former slaves. He left his family at 16 and settled in the Santa Clara Valley. He was the first African American to hold a major administrative position at an American University as the superintendent of athletic buildings and grounds at Stanford [a 51-year tenure]. In 1917 he purchased property in the redwoods becoming the first African American to do so. . . . Sam loved the land and considered it a weekend and holiday retreat where he often hosted parties for colleagues and students. “ — San Mateo County Parks interpretive panel

In the early 1970s, two women who lived in the area, Grace Radwell and Claire Dedrick, saved the redwoods from the ax. They organized conservationists to stop the logging, then raised money to complete the purchase of the grove. On the East Brook trail I noticed a dead mole smack in the middle of the path just like I had in Samuel P. Taylor State Park. The second one in five weeks. I could not figure out what might have flushed it from its underground labyrinth and caused it to die. Its body was intact so it was clear it hadn’t been run over. Was something poisoning the ground below? Did it simply die of old age (about 6 years)? I’m curious whether other hikers have run into dead moles lately.

Pescadero Creek County Park connects not only to two other redwood parks of San Mateo county, it also abuts Portola Redwood State Park on its eastern edge. It can be reached directly on the Western side at the Hoffman Creek trailhead. From here it’s a short distance to Pescadero Creek, which is still flowing lightly and could benefit from November rains.

The watershed is still moist enough to support fungi of different kinds. I’m not familiar, however, with the various species. We need an app like IBird for fungi and bryophytes, to allow us to plug in characteristics like color and gills, in return for a determination of species. 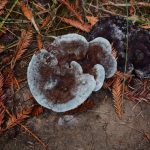 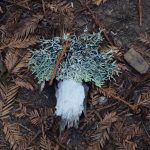 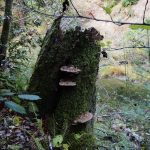 Pescadero Road runs through Memorial Park, whose highest peak is 1,078 feet. On the forest floor I found one single small blooming aster amid plenty of humus, which was supporting sorrel and ferns. As in other forests, the dead mature redwoods give life to various plants such as huckleberry bushes, ferns and even young redwoods as seen here.

Whichever park you visit, you won’t be disappointed if you’re looking for trails that will take you through redwood groves ripe with mystery and inexplicable beauty.